Yui's general appearance in the anime and light novel.

Yui wears an aprons when Yukino teaches Yui how to make cookies. 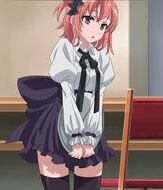 Yui wore this maid uniform along with Yukino in a local maid cafe in Chiba to discover whether Saki works at the cafe or not.

Yui wore Yukino's dress after the Service Club discovered that Saki works nights in the cafe on the top floor of the Royal Okura Hotel.

Yui wore this when she went to Chiba village as a service club activity.

Yui wore this dress when she took sable for trimming where she runs into Hachiman and Yukino mistaking them to be on a date.

Yui appears in a monster costume for the test of courage in Chiba village summer camp to scare the elementary school children in the forest at night.

Yui appears in her swimsuit by the riverbank playing with Komachi.

Yui wore this T-shirt throughout the cultural festival of school. 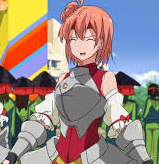 Yui wore this outfit in an event created by Yoshiteru based on the Battle of Kōnodai during the Sports Festival. It seems to be a parody of one of Saber's alternate outfits from "Fate/Unlimited Codes" called "Saber Lily".

Yui wore this dress to compete in Komachi's bridal dress contest to find the best bride as a reference for the magazine that promote "Love and Marriage" to teenagers.

Yui wore a Kimono during the Fireworks Festival,

Yui wears an Apron during their Pre-Valentine Collaboration.

OP of Season 2 shows Yui with her dog.

Yui during the opening credits of the second season
Add a photo to this gallery
Retrieved from "https://oregairu.fandom.com/wiki/Yui_Yuigahama/Gallery?oldid=31362"
Community content is available under CC-BY-SA unless otherwise noted.