Yahari Ore no Seishun Love Comedy wa Machigatteiru (やはり俺の青春ラブコメはまちがっている), also known as My Youth Romantic Comedy Is Wrong As I Expected, or My Teen Romantic Comedy SNAFU, Hamachi (はまち), and OreGairu (俺ガイル) in short, is a Japanese light novel series written by Wataru Watari, illustrated by Ponkan8, and published by Shogakukan. There are also three ongoing manga adaptations and several anthology volumes. The series has been adapted into an anime television series in 2013, which was followed by second season which aired in 2015. A third season was announced on March 18th, 2019.[1] It was revealed at Anime Expo 2019 the third season will be released in spring 2020.[2] Two video games for the PlayStation Vita, published by 5pd., which were released in 2013 and 2016, each with an OVA video. Sentai Filmworks announced an English Dub for seasons 1 and 2 which will be released in 2019.[3]

The story follows two loners, the pragmatic Hachiman Hikigaya and beautiful Yukino Yukinoshita, who despite their varying personalities and ideals, offer help and advice to others as part of their school's Service Club, assisted by the cheerful and friendly Yui Yuigahama. It largely depicts various social situations faced by teens in a high school setting and the psychology driving their interactions.

Yahari Ore no Seishun Love Come wa Machigatteiru is a linear story told from the main character, Hachiman Hikigaya's point of view. The audience is given the same information Hachiman gets, as well as Hachiman's internal monologues/thoughts.

The light novel Yahari Ore no Seishun Love Come wa Machigatteiru is the original content for this series. There are currently 14 volumes with the 14th being the final novel. There are an additional 3 ".5" Volumes (6.5, 7.5, 10.5) that have also been released for 16 total.

There are 4 manga adaptations of the light novel.

The @comic is the only Manga being printed in English as of November 13, 2018.

Blu-ray disks or BD's were released for both seasons of Yahari Ore no Seishun Love Come wa Machigatteiru. They are video disks that contain 1-2 episodes of the anime (Japan Only). There are 7 Volumes of BD's for each season.

There is also a "Complete Season" BD that contains all 13 episodes of that particular season.

The Blu-ray and DVD releases changed the character designs slightly and fixed some animation issues. 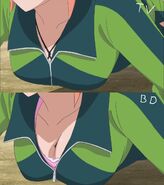 A comparison between the TV broadcast and Bluray

An animation mishap for the TV broadcast where Yukino is not wearing any pants.

The mistake is fixed on the Blu-ray version.
Add a photo to this gallery

The Drama CD's are bonus audio tracks that contain various stories that are considered CANON.

There are currently 4 Drama CD's released. They are bundled with special editions of the light novels (3, 7, 7.5, and 6.5). The Audio tracks are also transcribed into Bonus Chapters in those novels

ANOTHER, or Oregairu.a is an alternate/other storyline. It is considered to be NOT the main story and NON-canon, by Wataru Watari. With each release of the Season 2 BD's a volume was included (7 total).

Retrieved from "https://oregairu.fandom.com/wiki/Yahari_Ore_no_Seishun_Love_Comedy_wa_Machigatteiru_(series)?oldid=34173"
Community content is available under CC-BY-SA unless otherwise noted.