An audio CD, titled Tatoeba Konna Birthday Song (たとえばこんなバースデーソング, subtitled with "Birthday Song for you"), was released with a special edition of Volume 3 on November 18, 2011. The drama CD contains a character song, performed by Yukino Yukinoshita and Yui Yuigahama (Saori Hayami and Nao Tōyama), titled "Bright Generation" and composed by Yukari Hashimoto.

A transcribed (written) version is included as a bonus chapter in Volume 3 English editions and some Japanese reprint editions.

Chronologically it takes place after Volume 3 of the light novel and Episode 6 of the anime.

The CD details a larger birthday party held for Yui. It involves the Service Club, Totsuka, Komachi, and Zaimokuza going to karaoke.

Interestingly the voice actors chosen for the characters were all brought back for the second Drama CD as well as the anime (June 2013). 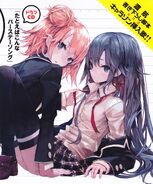 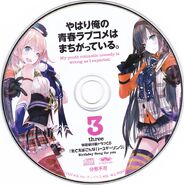 Package Interior
Add a photo to this gallery

Retrieved from "https://oregairu.fandom.com/wiki/Tatoeba_Konna_Birthday_Song?oldid=28344"
Community content is available under CC-BY-SA unless otherwise noted.