The Thing That the Light in Each of Their Hands Illuminates.

Isshiki is escorted home by Hachiman after her rejection by Hayato and reveals that his recent outburst in the Service Club had prompted her to act prematurely. Hachiman has the Student Council meet with the Service Club some time later and proposes that they adamantly push for a drastic change in the Kaihin-Soubu meeting to prevent a disaster in the Christmas event. The Soubu students then try this tactic at the next meeting and when Tamanawa shoots them down, Hachiman calls them out on their fear of responsibility coupled with their inability to perform under said responsibility as further proposed by Yukino. This has the desired effect and they soon settle on a musical rendition and stage play. Finally on the day of the Christmas event, Isshiki takes charge and the event turns out a huge success. The Service Club go out to celebrate the New Year a week later and Hachiman gives Yukino some advice to spend the season with her family. Hachiman and Yui go shopping for Yukino's birthday the next day and run into Haruno and Hayato while waiting on their parents. Haruno then calls Yukino over from home, much to her annoyance and her strained familial ties are expressed when her mother arrives and offers her to stay, but Haruno tells her not to.

Hayama and Hachiman encounter each other after Hayato's rejection of Iroha, where Hayama express his feelings of being flattered by Iroha's confession but feels it was meant for someone else. Hayama then praises Hachiman for having the ability to change people and again expresses that he is not the nice guy every one makes him out to be.

The scene shifts to the train, in which Iroha and the service club members go to their respective house. When the service club reaches their destination, Hachiman questions Iroha and then she forces him to stay by claiming that her bags are heavy. On the way, Iroha surprises Hachiman that her actions are because of the influence of the recent dispute in the service club and Hachiman's desire for genuineness. When Hachiman asked her to forget it due to his embarrassment. Iroha explains that she cannot and adds on that Hachiman should take responsibility for her actions.

The next day the student council meets at the service club where Hachiman proposes an idea to oppose Kaihin sogou as the ideas were sure to fail and possibly become a joke. The vice president is not ready to go with Hachiman's idea this late in the game. But Iroha surprises everyone by agreeing to go along with it. The next planing committee Sobu High proposes that they should split their load and they will focus on a Christmas play but Tamanawa is against it by claiming that it will affect the synergy and double risk and members of Kaihin sogou also agreed with Tamanawa. Hachiman again brought up the topic of lackness in budget and men but Tamanawa already had the answer that they should deal with it in this planing committee.

Seeing no other alternative Hachiman call them on fear of responsibility. But the committee suggested a cool down since they feel of a communication lag. But Yukino further intensified Hachiman words with harshness which is later followed by Yui who calmed the situation by saying that splitting of load will make both the schools mark on the event and asked the opinion of Iroha and faced kaori for her answer, to which Kaori answers positively and ask for the agreement of her peers. Iroha later scolds Hachiman and Yukino for their stunt but they tried to wrong each other.

Hachiman later encounters Kaori who offers him a tinned tea drink, which he accepts. She talks to him and explains that she sees him in a new light, though she adds on that they cannot engage in a romantic relationship since she believes Hachiman didn't have the boyfriend material, to which he remarks that is a role that he is no longer interested in filling that role. However, Kaori states they can be friends before she invites Hachiman for their junior high reunion to which Hachiman bluntly turns down and she laughs, thinking its a joke.

Hachiman later helps Rumi with the decoration, where Rumi first states that she can do it alone when Hachiman was about to leave, she watches him in upturned eyes. Hachiman without hurting her pride offered to help her by saying that he didn't need anyone's help. Later Rumi asked him to address her by her first name. Hachiman asked Rumi if she can star the Christmas play Sobhu high putting on.

The next scene shows the day of the event, where Yukino is making cakes and Yui is packing cookies. Iroha express her nervousness to Hachiman and later asks him to keep up at their schedule to which Hachiman address her as president. The kaihin sogou first perform their concert while the Sobu high is dressing the elementary student as angels for the play, we get to see Saki dressing up her sister as well. Rumi spotlight her performance while the rest of the angels of elementary school carry the cakes made by Yukino to the audience.

Hayama's clique is also among the audience. Both the president give instruction to their subordinates leading to a great success of the event.Then the service club members have tea in their room with a new mug for Hachiman which Yui claims as a Christmas present while Yukino brush it off as a replacement of paper cup. Hachiman thanked his clubmate for fulfilling his request, only to be hinted that the request is not over by Yukino and that she will fulfill his request confusing Hachiman and shocking Yui.

The next scene shows the service club members along with Komachi making a shrine visit. Yui asks Hachiman to accompany her in purchasing Yukino's birthday present to which Hachiman agrees for their shopping the next day. Yui receives a call from Yumiko during their stroll in the place while Yukino waves good bye to Yui as she was ready to leave to home. Komchi slyly slides away claiming to purchase a good luck charm. Hachiman (aware of her motives) tries to leave as well but Komachi admonishes him and forces him to go with Yukino, providing alone travel between Yukino and Hachiman.

In a train due to inertia, Yukino holds onto Hachiman's sweater. Hachiman questions about Yukino's visit to her family for the new year but Yukino feels that won't make any difference. Hachiman drops off at his stop but before leaving Yukino says that she looks forwards to this year along with them.

The next day, both Yui and Hachiman are shown to purchase things on a mall where they run into Haruno and Hayato who were waiting for the new year traditional family lunch. Hayato and Haruno explains their situation and Haruno slyly contacts Yukino to join them after a denial by Yukino, Haruno persuade Yukino to come by intimating Yukino the presence of Hachiman with them. Yukino arrives and surprises to see Yui with them as she was not informed of Yui's presence there. Yui explains about her shopping with Hachiman which earns a visible reaction in Yukino's face.

Haruno criticizes Yukino for being late but Hayato defends Yukino and address her by first name accidentally and later brush it off. Later Yukino's mother arrives to the spot and was introduced. Mrs Yukinoshita was surprised to learn that they were Yukino's friends. When the Yukinoshita family along with Hayato was about to leave for feast, Yukino was reluctant to go and looks at Hachiman but Haruno understood the meaning and asked Yukino not to, an awkward situation is felt in the restaurant. 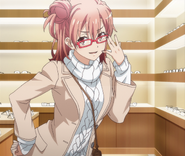 Add a photo to this gallery
Retrieved from "https://oregairu.fandom.com/wiki/Season_2_Episode_10?oldid=33844"
Community content is available under CC-BY-SA unless otherwise noted.