When she chanced upon Hachiman in a prep school, she wore a T-shirt, leggings, jean shorts, a jacket and the T-shirt had a low V shaped neckline. She also carried a backpack to prep school.

Saki wears an unbuttoned collared shirt that is tied at the bottom in the light novel. In the anime, she has a blue jumper tied around her waist. Her shirt is without a ribbon. In the light novel, Saki wears her blazer open, but she just wears her collared shirt in the anime. She wears white sneakers with green stripes, that make cross like shapes. Her hair is tied in a ponytail by a red and wavy scrunchie. She carries her school bag in an unusual way. Saki carries her bag with her right palm facing forwards and her bag resting on her back. She has a similarly-shaped and purple wrist band on her right wrist. She carries a blue handbag.

Saki uses a purple scrunchie to tie her hair. Her hair is in a bun with the end protruding backwards. She has an emblem on the lapel of her black waistcoat. This is a circular and purple badge with a yellow wine glass and quarter moon on it. She wears a name tag directly underneath. She wears a stand-up collar dress shirt with a bow tie. She finishes the outfit with dress pants.

Saki looking out the window.

Saki made and wore this outfit in an event created by Yoshiteru based on the Battle of Kōnodai during the Sports Festival. It seems to be a parody of one of Saber's alternate outfits from"Fate/Unlimited Codes" called "Saber Lily" or Eucliwood Hellscythe's armor from "Kore wa Zombie desu ka".
Add a photo to this gallery 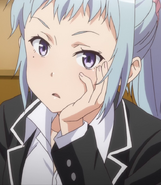 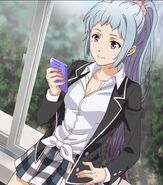 Kawasaki Saki as she appears in the Second Visual Novel.

Kawasaki Saki and her sister Keika in VN Zoku in their thermae scene.
Add a photo to this gallery

Retrieved from "https://oregairu.fandom.com/wiki/Saki_Kawasaki/Gallery?oldid=32153"
Community content is available under CC-BY-SA unless otherwise noted.