Kanojotachi no, We Will Rock You♡

A third drama CD, titled Kanojotachi no, We Will Rock You (彼女たちの、うぃー・うぃる・ろっく・ゆー♡, subtitled with "We will... We will rock "you"!!"), was bundled with the special edition of Volume 7, published on March 19, 2013. The drama CD contains a character song by Yukino Yukinoshita and Yui Yuigahama (Saori Hayami and Nao Tōyama), titled "Rock You!!" and composed and arranged by Yūya Saitō.

A transcribed (written) version is included as a bonus chapter in Volume 7 of the English novel (February 2019).

But not included in the Japanese novel (August 2013).[citation needed]

The bonus track takes place after Volume 6 (November 2012) and Episode 12.

It provides details about the party that was held after the Culture Festival. 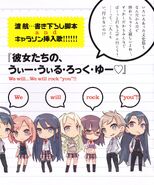 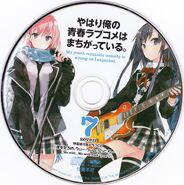 Package Interior
Add a photo to this gallery

Retrieved from "https://oregairu.fandom.com/wiki/Kanojotachi_no,_We_Will_Rock_You%E2%99%A1?oldid=29480"
Community content is available under CC-BY-SA unless otherwise noted.