Hikigaya Komachi no Keiryaku (比企谷小町の計略, meaning "Komachi Hikigaya's Tactics", subtitled with "His sister's tactics"), is the second drama CD released. It was originally sold together with the first one at Marvelous AQL's booth at Comiket 83, from December 29-31, 2012.

A transcribed (written) version is included as a bonus chapter in Volume 7.5 (August 2013).

It takes place after the Volume 3 Drama CD.

It continues the story and concludes Yui's birthday party. it involves the same group going to an arcade and playing various games while running into Shizuka again. 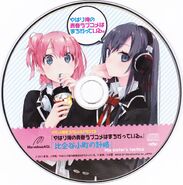 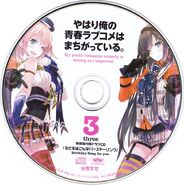 Reprint Edition Back
Add a photo to this gallery
Retrieved from "https://oregairu.fandom.com/wiki/Hikigaya_Komachi_no_Keiryaku?oldid=28221"
Community content is available under CC-BY-SA unless otherwise noted.