For The Third Time, He Turns Back To The Path From Whence He Came.

Hachiman Hikigaya is at home growing restless as the end of summer approaches. Yui Yuigahama shows up to get her dog Sablé, whom Komachi Hikigaya is dog-sitting. As thanks, Yui invites Komachi and Hachiman to the upcoming Fireworks Festival, however Komachi slyly declines the invitation, instead pressuring Hachiman to accompany Yui to buy her things from a shopping list instead.

On the day of the festival, Hachiman keeps telling himself that Yui is just being a nice girl and that her actions don't mean anything. As they shop for Komachi's items, they encounter Minami Sagami and her clique who tease Yui for being with Hachiman. While Yui is chatting with Minami, Hachiman heads off to buy the food that Yui wanted. When Yui returns she remarks on Hachiman's thoughtfulness.

As the fireworks start, Hachiman and Yui are looking for a good place to sit and watch. They are noticed by Haruno Yukinoshita. Who invites them into the VIP section, as she is there representing her father. As the three sit and watch the fireworks, they discuss their relationships with Yukino Yukinoshita, with Haruno commenting on Yui and Hachiman's "date", while lamenting that things never seem to work out for Yukino. Yui strongly reiterates her friendship with Yukino.

After the fireworks, Haruno offers to take Hachiman and Yui home in her limo, explaining that you can't even see the damage anymore (from the accident). Hachiman and Yui are hesitant to accept, as it is the car that hit Hachiman. They end up declining despite Hachiman's words that he isn't bothered by the past accident.

On the way home, Yui asks Hachiman if Yukino had ever told him about the accident to which he negatively replies, stating that they should not dwell on matters that Yukino would rather not discuss. Yui retorts that she would like the three of them to get to know each other better and be closer friends. She also suggests that herself and Hachiman would have been friends even if the accident hadn't occurred. Although Hachiman rejects Yui's theory. As Yui steers the conversation towards romantic feelings, Yui is interrupted by a call from her mother, though intent on continuing, Hachiman tells her to answer and she hurries off.

School resumes the next day, Hachiman and Yukino run into each other on the stairs. They talk for a bit and Yukino mentions Haruno told her about their chance meeting at the fireworks show. Yukino is nervously about to tell Hachiman something, but he cuts her off, asking if the Service Club is starting again which she confirms.

As they walk away, Hachiman ends with a soliloquy explaining that he hates himself for believing his own forced perspective/idea of Yukino, who is "always truthful", because just like any ordinary person, she too can lie. 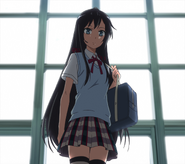 Add a photo to this gallery
Retrieved from "https://oregairu.fandom.com/wiki/Episode_9?oldid=34331"
Community content is available under CC-BY-SA unless otherwise noted.