Finally The Beginning Between Him And Her Has Ended.

Episode 6 is roughly adapted from Volume 3 of the light novel.

As school resumes, Hachiman Hikigaya feels satisfied that he was able to "reset" his relationship with Yui Yuigahama so that she is no longer burdened by guilt. The days progress and Yui has seemingly dropped out of the Service Club. Shizuka Hiratsuka visits the Service Club and explains the club is more active with more members. She tells Yukino Yukinoshita and Hachiman to "replenish their human resources", in other words, tells them to find a third person to join the club. Yukino tells Hachiman that she would like to get Yui to rejoin the club and smooth things over by celebrating her birthday.

That weekend, Yukino, Hachiman and Komachi Hikigaya go shopping to find presents for Yui. Komachi disappears leaving Hachiman and Yukino clueless as to what to buy Yui. They eventually decide on buying her some type of comfortably designed clothing. Afterwards, they are confronted by Yukino's older sister, Haruno Yukinoshita, who teases Hachiman and Yukino about being a couple. After Haruno leaves, Hachiman remarks on Haruno's cheerful facade.

When Hachiman and Yukino continue shopping, a dog (Sable) runs out of nowhere and starts playing with Hachiman. As he wonders whose dog it is, Yui appears and mistakes them for being on a date. She hurriedly makes to leave with Sable, but not before Yukino asks her to visit the Service Club to "talk about their relationship" on Monday.

On Monday, Yui returns to the Service Club for what she thinks is a confirmation that Hachiman and Yukino are dating. Hachiman clears her misunderstanding and Yukino thanks Yui for all that she did for the club and gives her a birthday present. Hachiman also produces a present for her, and refers to their last encounter at the Workplace tour. Yui laments that she doesn't want their relationship to end. Yukino helps repair the rift between them by stating "by 'ending' one path, they can 'begin' a new one", before she leaves to inform Shizuka of Yui's return. Yui is relieved and happily runs off. Afterwards, as Hachiman readies to leave, he picks up Yukino's book, while thinking about Yukino's words. 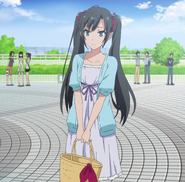 Add a photo to this gallery
Retrieved from "https://oregairu.fandom.com/wiki/Episode_6?oldid=29245"
Community content is available under CC-BY-SA unless otherwise noted.