Once Again, He Returned To His Original Path.

Episode 5 is adapted from chapters 4-5 of Volume 2.

Hachiman Hikigaya arrives late for his after school prep class and is reprimanded by Shizuka Hiratsuka. At the same time, another student, Saki Kawasaki also arrives late. As Hachiman leaves the class he notices Saki looking at a flyer for summer school classes.

Later, Hachiman runs into Yukino Yukinoshita, Yui Yuigahama and Saika Totsuka having an after school study session at a local cafe. They are joined by Komachi Hikigaya and her friend, Taishi Kawasaki, Saki's little brother. Taishi explains that he is worried about Saki since she comes home late every night. Yukino considers his problem to be within the Service Clubs scope and agrees to investigate Saki's situation.

At school, the Service Club try and fail, using various methods to approach Saki. They eventually learn from Taishi that Saki works at a cafe somewhere in Chiba City, and track down the two most likely cafes. The Service Club discover that Saki works nights at the Angel Ladder Cafe on the top floor of the classy Royal Okura Hotel.

Yukino, Yui, and Hachiman dress appropriately to blend into the "elite" environment. They go to the hotel to confront Saki. Yukino uses the fact that Saki lied about her age to the management so that she can work nights as blackmail. But Saki still refuses to quit. Saki then reveals that Yukino is actually from a rich family and couldn't possibly understand her reasons for working. Yukino becomes upset and leaves with Yui. Hachiman asks Saki to meet him the next morning before school.

Later, Hachiman gathers everyone for the meeting with Saki and reveals to the group his guess for why Saki is working. He assumes that Saki is working to fund her summer school tuition so as not to burden her family. Hachiman solves the problem by telling Saki to apply for scholarships.

As Hachiman and Komachi walk home, Komachi reveals to Hachiman that the owner of the dog he saved in the accident was Yui, surprising him.

This prompts Hachiman to ponder on this new knowledge and what to do with it. The next day, at the Workplace Visit he is the last person to leave and is met by Yui who was waiting for him. Hachiman surprises Yui by cutting his ties with her, believing that she was only nice to him out of guilt because he saved her dog. Upset by his words, Yui calls him a jerk and runs off in tears. Hachiman ends with a soliloquy explaining that a loner such as himself might misunderstand feelings of girls when they are nice to him, so rather than fall for that "trap", he will always hate and reject them. 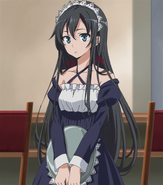 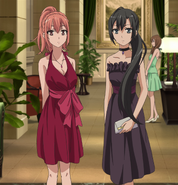 Add a photo to this gallery
Retrieved from "https://oregairu.fandom.com/wiki/Episode_5?oldid=29244"
Community content is available under CC-BY-SA unless otherwise noted.