And So, Their Festival Will Never End.

The Service Club receives an email on the Trans Chiba Advice Please website from Meguri Shiromeguri, the Student Council president. Meguri wants their help making the Athletic Festival a "blast" for students. She also wants to win as it is her last year at Sobu High School.

The Service Club agrees and joins Meguri in the planning committee room. To make the Athletic Festival great they decide to have two special events, one for the girls and one for boys. After having all of their special event ideas rejected by Shizuka Hiratsuka they decide to "outsource" the planning to experts, Yoshiteru Zaimokuza and Hina Ebina. They decide on a Chiba Shouldertop Engagement or "ChibaSEn" (Kibasen is the actual term used. It translates to Cavalry Battle in English) for the girls event, and a two way Bo-taoshi (Pole Toppling) event for the boys.

During the festival Hayato Hayama is keeping the white team ahead by winning many events. The red team needs to win both the girls and boys special events to win the festival. The red team, led by Yukino Yukinoshita, Yui Yuigahama, and Meguri, wins the girls event.

Hachiman Hikigaya comes up with a plan involving himself and Zaimokuza using a twofold deception. For the boys event, Hachiman uses Yoshiteru to create a distraction while he stealthily approaches the white team's pole by disguising himself has a white player using some bandages. Although he is stopped by Hayato, Hachiman reveals his double feint and at that moment has Yoshiteru charge at the pole and win the event. Meguri is seen celebrating with Yukino and Yui.

The next day in the club room it is revealed that the boys team was disqualified because "someone's" (Hachiman's) plan was deemed illegal. They promise to win next year, Hachiman points out they may not be on the same team next year and this motivates Yukino even more. 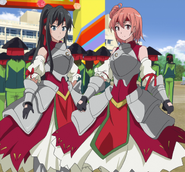 Add a photo to this gallery
Retrieved from "https://oregairu.fandom.com/wiki/Episode_13?oldid=32273"
Community content is available under CC-BY-SA unless otherwise noted.